Vancouver, BC, January 13, 2022- StraightUp Resources Inc. (CSE: ST) (OTCQB: STUPF) ("StraightUp" or the “Company”) is pleased to announce that it has received its early exploration permit (PR-21-000261) from the Ministry of Northern Development and Mine, Natural Resources and Forestry (NDMNF) on their RLX North property, located within the Red Lake Greenstone Belt of Northwestern Ontario. The permitted activities are mechanized drilling (assembled weight >150kg) and ground geophysical surveys requiring a generator. This permit is effective for a period of three (3) years.

The area covered by the newly issued permit is the eastern block of the RLX north Property where the company has interpreted the location of the Balmer-Confederation unconformity and D2 structures. The majority of the historic and current production from the Red Lake district has been mined within a few hundred metres of this important geological contact, making it a high priority exploration target.

This interpretation is aided by the historic Selco drill hole 5-1 from 1980 (ARFI52N03SW0002). This drill hole intersected mafic/ultramafic volcanics with interbedded metasediments in the upper portion of the hole and felsic volcanics in the lower. The drill logs report quartz veins with 3% pyrite, 2% pyrrhotite and local semi-massive pyrrhotite in metasediments however, no assays were reported.

Straightup is taking a systematic approach to developing and testing gold targets starting with detailed data compilation, including interpretation of the high-resolution airborne geophysical surveys conducted in 2021, combined with detailed regional structural interpretation to pinpoint the highest priority targets for Orogenic gold occurrences. The Company is planning its 2022 work programs, which is expected to include drilling of the most prospective targets this summer. 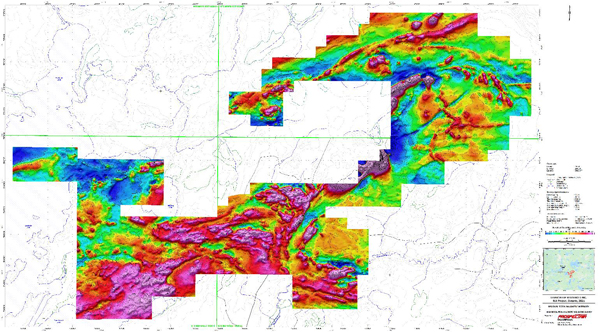 StraightUp’s President, Mr. Mark Brezer, said, “We are now in an excellent position to move forward and plan a drill program on both of these RLX properties for this year. The latest results, combined with our extensive data set from previous exploration, strengthen our commitment to the Red Lake Mining District and its potential for legendary, high-grade gold discoveries. Local expertise is continuing to prove itself invaluable to our exploration goals and management extends further gratitude for everyone’s commitment and timely efforts”.

The RLX North and RLX South properties are located 25km southeast of the town of Red Lake. The primary distinction between the two properties is with the interpreted geology underlying each, with the North being primarily of the Balmer Assemblage and the South being Confederation. The contact between these two metavolcanic packages is highly prospective for economic deposits of gold in the Red Lake mining camp with the majority of production being with in a few hundred metres of it. Historic exploration of the RLX claims which includes some diamond drill holes dates back to the early 1980’s. Previous operators have spent approximately $1 million on drilling, soil geochemical surveys, line cutting, IP and geophysical surveying.

Jacqueline Collins has been appointed Corporate Secretary of the Company effective January 4, 2022. Ms. Collins is a Securities/Corporate Finance Paralegal with over 30 years of experience as a legal administrator, corporate secretary and paralegal at both independent and national law firms, and with public resource companies.

StraightUp is engaged in the business of mineral exploration and the acquisition of mineral property assets in Canada. Its objective is to locate and develop economic, precious and base metal properties of merit. StraightUp intends to conduct exploration on the RLX North, RLX South, Belanger and the Ferdinand Gold Property, all located in the Red Lake Mining Division as well as the recently acquired Bear Head Gold Project, located within the Meen-Dempster Greenstone Belt of the Uchi Subprovince, approximately 80km west of the Pickle Lake Gold Camp. The Company’s recently acquired West Cat Mine includes an Unpatended Mining Claim on Federal Land, located in the Historic Beatty Mountain Nevada Mining District / Nye County Nevada about 15 km east of US-95, approximately 20 km from Beatty, Nevada at the base of the Bare Mountain Range.

Brent Clark, P. Geo, an independent qualified person as defined in National Instrument 43-101, has reviewed, and approved the technical contents of this news release on behalf of the Company.

Neither the CSE nor its Market Regulator (as that term is defined in the policies of the CSE) accepts responsibility for the adequacy or accuracy of this release).