The 2,100 hectare Belanger Property is located approximately 75 km east of Red Lake, Ontario in the Red Lake Mining Division. Access to the property is from the town of Ear Falls up South Bay Mine Road, 65 km northeast of the town of Ear Falls. A recent Technical Report completed recommends a further exploration program to evaluate the potential of economic gold, with associated base metals, mineralization on the Property. According to the most recent report, it is recommended that the Company complete an exploration program comprised of:

Historic exploration on the property in the 1990’s identified three significant surface exposures of gold, copper and silver mineralization in the southern portion of the property, referred to as the Williamson Occurrences. These three surface showings, referred to as trenches “C”, “D” and “E” would appear to be on-strike of each other, with approximately 550-600 meters separating trenches “C” and “E”.

As each of the three trenches has been mechanically stripped of overburden in the 1990’s, there exists an opportunity to further study and interpret the underlying structural controls on gold-copper mineralization with the intent of targeting zones of higher grade along strike and at depth.

Several other gold or base metal occurrences occur throughout the property, including the Hemming Occurrences, which are located within the northeast trending Confederation Lake Narrows Deformation Zone. A property examination by the Red Lake Resident Geologist in 1997 suggested the showings associated with the Hemming Occurrences are found within a 060o trending shear zone that is potentially more than 100 m wide and extensively silicified.

The No. 2 showing is located about 2000 feet southwest of the Main showing. The No. 2 showing consists of a small trench sunk on a massive, white, quartz vein striking 040/90 along an exposed strike length of 35 feet. The vein is 9 feet wide at its northeast end and branches into 2 separate veins, which are 5 and 12 feet wide, at its southwest end. The vein contains chloritic inclusions of wall rock and minor amounts of galena. The vein occurs at a gabbro/tuff contact which is on strike with the No. 1 showing.

The No. 3 showing is situated about 3400 feet east-northeast of the No. 1 showing and is located on the north shore of a small lake. The showing consists of a 1 to 7-foot wide quartz vein which has been traced along a gabbro/tuff contact for 82 feet. G. Hemming reported that a diamond drill hole targeted on the quartz vein at the No. 3 showing intersected 0.10 ounce Au per ton across 3 feet (Pryslak 1975).

Subsequent work on the Hemming Occurrences in the 1990’s exposed several other quartz or mineral occurrences associated with the aforementioned shear zone over a potential strike length of 2.5-3.5 km, however, to date precious or base metal values have been erratically distributed among the various showings (Blackburn, et.al. 1998) 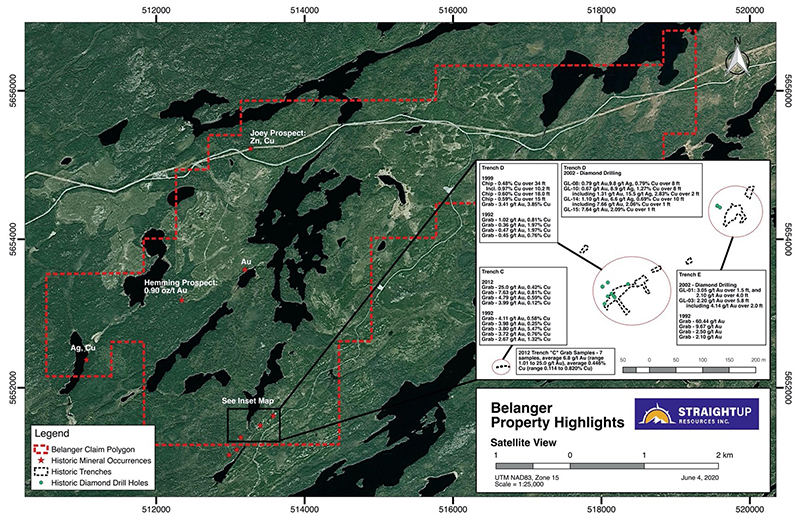 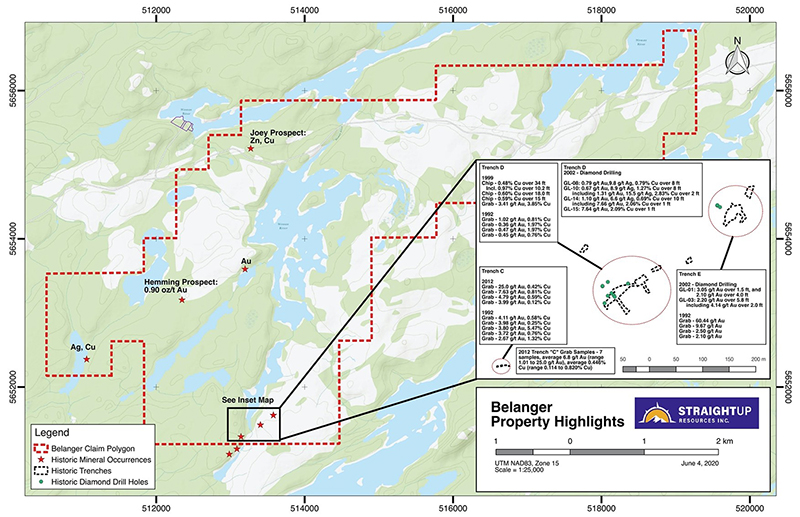 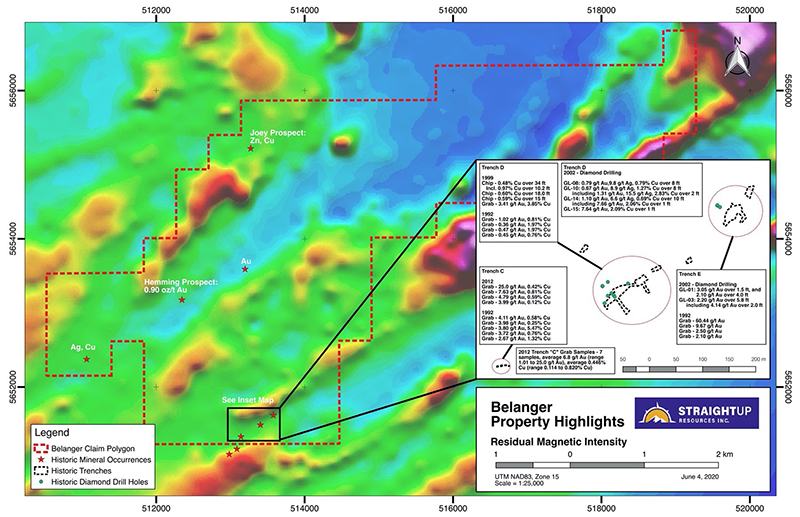