The primary distinction between the two properties (RLX North and RLX South) is with the interpreted geology underlying each, with RLX North interpreted to be underlain primarily by the 2.96-2.99 Ga Balmer Assemblage, and RLX South interpreted to be underlain primarily by the 2.73-2.75 Ga Confederation Assemblage. The contact between these two metavolcanic packages is highly prospective for economic deposits of gold in the Red Lake mining camp. The majority of historic gold production from the district has been mined from within a few hundred meters of this important geological contact, making it a high priority exploration target.

The exact boundaries and the contact between the two metavolcanic packages, and the surrounding felsic intrusives are not accurately mapped owing to the presence of thick overburden. The lack of rock exposure (less than 1%) has also resulted in limited historical exploration, and the property is underexplored in comparison to other areas of favourable stratigraphy within the Red Lake Greenstone Belt. This represents an exploration opportunity, to answer previously unanswered questions about the underlying geology of the area.

Until recently, historic exploration had been limited, particularly in the areas of preliminary interest on the property, sufficient exploration has been done to provide some useful data to be reinterpreted. Selco diamond drill hole 160-5-1 drilled in 1980, for example, was collared in the northeastern portion of the RLX North property. Based on government geological maps, this drill hole was collared several hundred meters into the surrounding felsic intrusives. However, an examination of the drill core logs reveals that the drill hole remained in metavolcanics or metasediments for its entire 300 ft length. This hole was interesting and may warrant follow-up work because the top portion of the hole, which is almost exclusively mafic-ultramafic and metasedimentary, is consistent with lithology typical of the Balmer Assemblage, while the lower portion of the hole, which is almost exclusively felsic to intermediate, is consistent with lithology typical of the Confederation Assemblage. It is possible that this hole may have transected the Balmer-Confederation contact in an area previously interpreted to be felsic intrusives.

Based on mapped geology and regional geophysical surveys, the project area can be interpreted to be a possible extension of the geology and structures hosting Evolution Mining’s Red Lake Gold Mines which are located approximately 10-17 km to the northwest of the RLX South and RLX North properties, respectively. Historic geophysical surveys have identified the possible presence of D2 folds and east plunging anticlines on property, which may be important structural controls on mineralization. 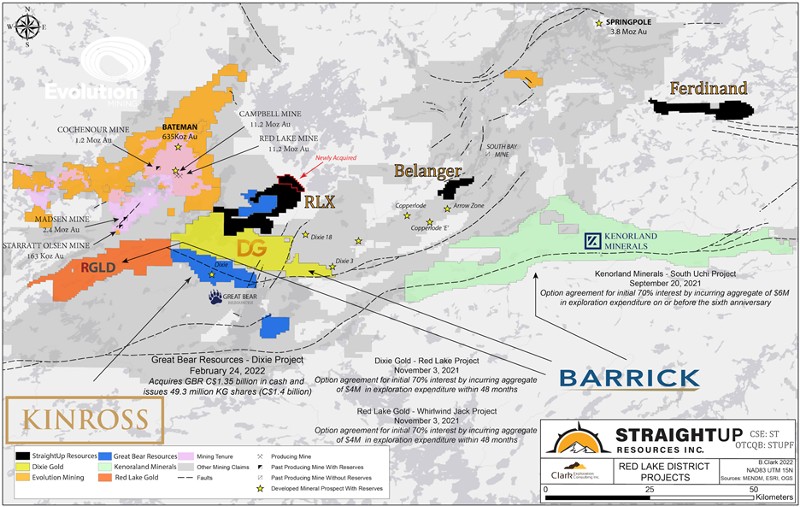 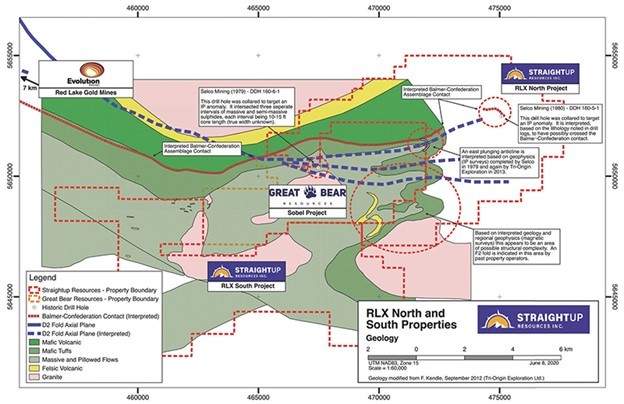 Tri Origin Exploration Ltd (TOE) staked one of the largest contiguous land positions in the Red Lake greenstone belt of northwest Ontario (early to mid 2000). This strategic land position covers the south-eastern extension of the Red Lake greenstone belt, from which over 22 million ounces of gold has been produced. The exploration concept was to unravel the geology and show the potential for hosting the same rock types that host some of the richest gold zones and named the project RLX (Red Lake Extension).

TOE commenced this strongly integrated geological project was comprised of programs of geological mapping, overburden geochemistry, airborne and ground geophysical surveying and diamond drilling have led to recognition of extensions and repetitions across the property of the important, gold-hosting rock units at Red Lake and the continuation across the property of major structural features thought to be important in localizing gold deposits at Red Lake. Importantly, sulphide mineralization and zones of rock alteration similar to those observed in the Red Lake District have been identified through Tri Origin’s work. Anomalous gold values have been found to be associated with these features.

Before TOE commenced the project the limited outcrop has hindered field mapping to date, especially in areas thought to host upper Balmer rocks. The primary rock types which have been identified on the property include mafic volcanic rocks, sedimentary rocks, and felsic volcanic rocks which are primarily located in the north and central-east portions of the property. Felsic intrusive rocks are found throughout the property. To date ultramafic rocks have only been identified in the occasional boulder and in a historic drill hole completed at the very northeast of the property during the 1970’s by Selco intersected ultramafic rock in association with sulphide iron formation, sedimentary/tuffaceous rocks and felsic volcanic units.

The Company announced that it has received its early exploration permit from the Ministry of Northern Development and Mine, Natural Resources and Forestry on their RLX North property, located within the Red Lake Greenstone Belt of Northwestern Ontario. The permitted activities are mechanized drilling (assembled weight >150kg) and ground geophysical surveys requiring a generator. This permit is effective for a period of three years.

The area covered by the newly issued permit is the eastern block of the RLX north Property where the company has interpreted the location of the Balmer-Confederation unconformity and D2 structures. The majority of the historic and current production from the Red Lake district has been mined within a few hundred metres of this important geological contact, making it a high priority exploration target.

This interpretation is aided by the historic Selco drill hole 5-1 from 1980. This drill hole intersected mafic/ultramafic volcanics with interbedded metasediments in the upper portion of the hole and felsic volcanics in the lower. The drill logs report quartz veins with 3% pyrite, 2% pyrrhotite and local semi-massive pyrrhotite in metasediments however, no assays were reported.

StraightUp is taking a systematic approach to developing and testing gold targets starting with detailed data compilation, including interpretation of the high-resolution airborne geophysical surveys conducted in 2021, combined with detailed regional structural interpretation to pinpoint the highest priority targets for Orogenic gold occurrences. The Company is planning its 2022 work programs, which is expected to include drilling of the most prospective targets this summer. 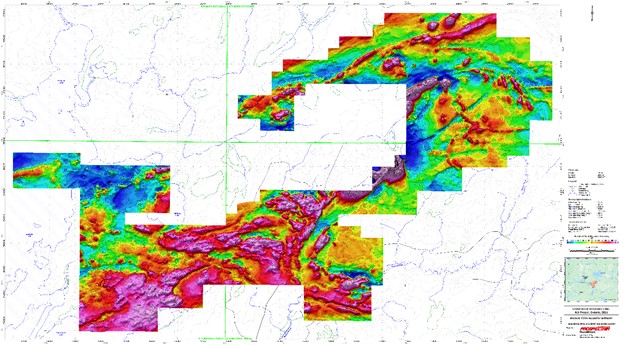